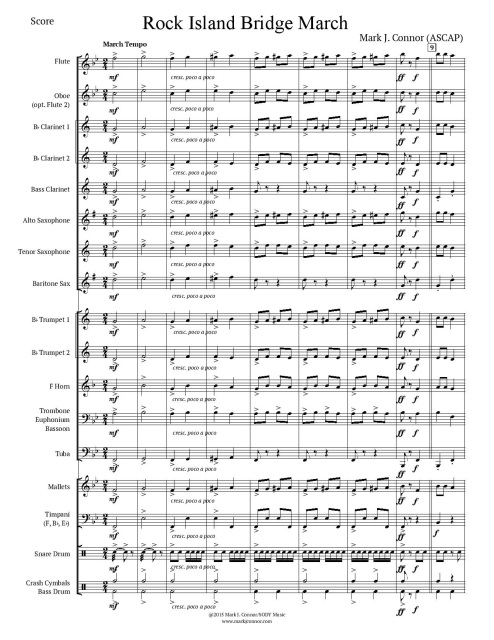 Mid America March: (Grade 3) The march is the quintessential American band style. With catchy melodies and interesting parts for all sections of the band, the Mid-America March continues that great tradition. Written shortly before Memorial Day, the work is dedicated to the professional Airmen-musicians of the United States Air Force Mid-America Band stationed at Scott Air Force Base in Southern Illinois, just outside of St. Louis.

Rock Island Rail Bridge March: (Grade 1.5) In 1856 the first bridge across the Mississippi connecting the cities of Rock Island, Illinois and Davenport, Iowa was built. Shortly after completion of the bridge, a steamship named the Effie Afton crashed into the bridge and was destroyed. The high profile trial that followed between the steamship owners and the railroad garnered national attention and thrust the Illinois lawyer who represented the railroad into the national spotlight. That lawyer, Abraham Lincoln, would use this fame as a stepping stone to the presidency. This delightful march for young band celebrates the building of the bridge and the removal of the Mississippi as a barrier for the railroads. With light syncopation and a distinctive tenor countermelody, this march features only four distinct parts plus percussion with all parts doubled throughout the ensemble making it suitable for bands of all sizes.